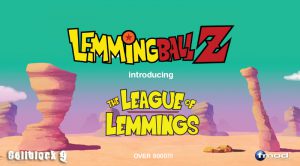 finally we pass the magical Treshold of version 9000!

And we celebrate this with loads of news

The standards for level design have also risen a lot, now featuring elaborate and authentic anime backgrounds made with love.

Enjoy the leaps and bounds LBZ made with new lighting and particle sytems… I am sure our coder would add about 27 feature points to count up how much everything has improved, but I think its enough to say: It looks amazing!

A new state-of-art netcode will provide more precision than ever in online games.

Several tweaks to the engine give weaker systems a good boost in performance.(Unfortunately, buisness cards with low versions of openGL will still have troubles).

Since LBZ is extremely fast paced, we worked out a lot of little helps to allow the player to focus on his fight without getting his controlls confused.

And we arent even done yet – heres some new stuff to come:

Have a lot of fun with this greatest version of LBZ, one that allows to use caps and say…